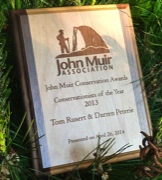 Darren Peterie and Tom Rusert, co-founders of Sonoma Birding based in Sonoma CA, received the 36th annual John Muir “Conservationists of the Year” Award. The award was presented at the 100th Anniversary celebration of both Muir’s birthday & his enduring legacy. In the history of public wilderness preservation, Muir’s achievements are unmatched. He was the founder of the Sierra Club in 1892 and “Father of our National Parks”. The conservation awards were presented at the John Muir National Historic Site in Martinez, California. Sonoma Index-Tribune 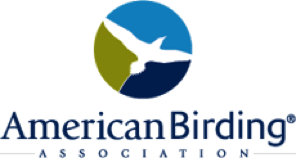 The Griscom Award was first presented to the renowned naturalist, Roger Tory Peterson, considered the father of the modern field guide,[3] in 1980. This distinguished ABA award was presented to Tom Rusert for his “citizen science” conservation efforts, across North America over 30 years.  Rusert is the co-founder of Sonoma Nature. The award is named after Ludlow Griscom, considered the “Dean of the Birdwatchers”,[2] and a pioneer in field ornithology.

Bernie Krause – Sound Expert meets up with Tom Rusert for the Dawn Chorus in Sonoma, CA. 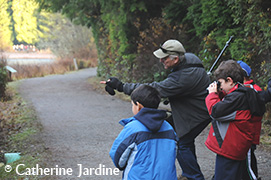